Bugs Bunny and Daffy Duck are central characters in the Looney Tunes cartoons and are seen getting into a squabble in the intro to Gremlins 2: The New Batch. The two of them are remembered as two of the all-time greatest cartoon characters.

Daffy Duck is a black duck who often has trouble speaking and has a lisp when he talks. Bugs Bunny is a tall gray and white rabbit who loves to eat carrots and tend to say "What's up, Doc?". He is the exact opposite of Daffy, which makes them compatible in some ways and non-compatible in others.

Bugs is sitting on top of the Warner Brothers shield that has the letters W & B. Then, Daffy Duck complains that he should be the star of the Warner Brothers intro plate. He pulls Bugs away from it, stating that 50 years of hogging was enough, then gets on it, but it goes too close to the screen, then Daffy, who got upset, pushes it back, then he gets hit into center of the Looney Tunes rings, and they around around him like a tutu. Daffy says, "Well, if I'm not going to star in this cartoon, we might as well just start the movie, solo!" and Bugs spins Daffy around and saying "Roll them!" And we see the title, "Gremlins 2: The New Batch".

There was a scene where Daffy was running to a door, but once he gets there, Bugs congratulates him as now Daffy is promoted as the typer of the movies' titles. Bugs tells him that the movie's title is "Gremlins 2" (for some reason, he did not add the words, "The New Batch"). Daffy puts in Gremlin Stew, which is what he thought Bugs said. Then, Daffy changes the title to The Return of Super-Daffy Meets Gremlins 2 Part 6: The Movie, but Bugs says that it's too long, and changes it to Gremlins 2 (in Gremlins font). Daffy announces that he quits and storms off. Bugs then says the title looks a little skimpy and added more words. This scene was cut off for being too long and replaced with the intro above.

The ending credits' background turns black to blue so that Daffy Duck (who is black) can appear. He states, "Long, isn't it?", "Patently Ridiculous!" and "Still lurking about? Don't you people have homes?" during the ending credits. Afterwards, the "That's All Folks" title card appears with Porky Pig stuttering, "That's all.." but then got pulled off and Daffy said, "Oh no you don't! Sorry, 60 years of hogging the end title is enough!" and stutters like Porky Pig, "That's all folks!", but then gets hit by the Warner Brothers shield again to reveal the details saying "TITLE ANIMATION Written & Directed by Chuck Jones", and Daffy painfully says "Fade out". 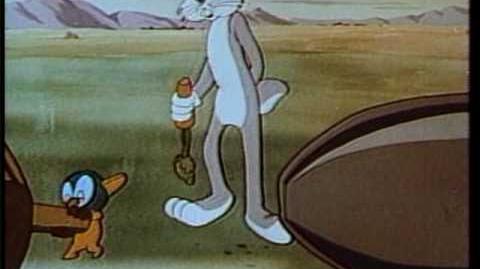 Gremlins in the data center
Bugs Bunny meets a Gremlin

okay mac let's take it from the top
Add a photo to this gallery
Retrieved from "https://gremlins.fandom.com/wiki/Bugs_Bunny_and_Daffy_Duck?oldid=26810"
Community content is available under CC-BY-SA unless otherwise noted.