Gremlins are creatures, who are the primary antagonists of the Gremlins franchise. They made their debut in the 1984 film, Gremlins and it's sequel, Gremlins 2: The New Batch. They are based upon the creatures with the same name of old English folklore, as well as tales passed around by American soldiers during World War II.

In both movies, the gremlins have a leader that is smarter than all others. Stripe is the leader in the first movie, while Mohawk is briefly the leader in the second movie (before being replaced by the smarter Brain Gremlin).

A Gremlin is the last stage of the Gremlin life cycle which goes from Mogwai to Cocoon to Gremlin. It is said that the Gremlins are considered to be an unwanted side-effect from when the Mogwai were created on a far-off planet to be used as ambassadors of peace on other planets.

They are just about one meter tall and they have scaly reptile-like skin, large batlike ears, three sharp claws on their feet and hands and equally sharp teeth. Their looks and color may vary, ranging between various shades and combinations of green, brown, and black. Their intelligence and strength also vary and they are all very mischievous, dangerously violent, and crazily fun-loving. They are capable of working (and sabotaging) complex machinery and devices, as apparent in folklore where they were believed to have brought down hundreds of planes in WWII.

No Gremlin has so far proved to be good-willed and nice, and most of them don't seem to even value the lives of their fellow Gremlins, sometimes beating or even killing each other for fun. Even though they are very energetic and often aggressive, they don't seem to hurt any humans who are not afraid of them. (For example, when Grandpa Fred was doing an inside scoop of what was happening inside the building, not a single gremlin behind him laid a finger on him.) Also, in the deleted scenes when Grandpa Fred was doing his section, George, Lenny, and Daffy were present but didn't try to scare or hurt him, rather joining him for fun.

Mogwai evolve into gremlins by eating after midnight, even after their metamorphosis, gremlins still retain traits they had as mogwai, such as their dislike of bright lights, their vulnerability to sunlight, and most dangerously their ability to multiply upon getting wet, unlike the mogwai, where small furballs pop out from their backs and quickly inflate to turn into new mogwai, the backs of the wet gremlins get riddled with big blisters that contain small gremlins, which rather quickly break free and start to grow, the gremlins that are giving birth to new gremlins are often more vulnerable than other gremlins because the birthing process is often extremely painful for the creatures, afterwards, they continue to live as if nothing happened, often along with the newly-born gremlins that have quickly grown to full gremlin size. Like mogwai, they can dissolve when exposed to sunlight.

It is unknown whether or not they're omnivorous or carnivorous. However, they don't usually eat food other than candy and other junk food. But while as Mogwai, Stripe and his brothers ate chicken legs, and Mohawk, Lenny, and George ate ice cream. Daffy has eaten corn, but he doesn't like chicken or mashed potatoes. Earl liked eating a sandwich that had lettuce, meat, and possibly cheese as he said, "Yum yum" when he grabbed a sandwich and ate it. Earl also liked the chocolate candy bar that Mr. Hanson gave him. However, Earl did not like the apple that he took a bite out of in Mr. Hanson's office, but he did like eating one of the glass test tubes. They also seemed to like Dr. Catheter's serums from Splice O' Life lab.

Some different colored gremlins from Gremlins 2: the New Batch. 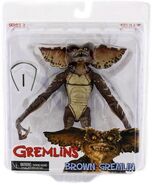 A generic Brown Gremlin NECA figure in his packaging.

The anatomy of a gremlin.