A Mogwai is a small creature of unknown origin, that was discovered by Rand Peltzer when visiting a Chinatown antique store.

If a Mogwai gets wet, it spawns new Mogwai from its back; small balls of fur that are approximately the size of a marble pop out from the wet Mogwai's back, then the furballs start to grow in size before unfolding themselves into new and fully grown Mogwai. This process does not take much time but it still usually takes just about a minute. According to the novel, the creator of the species, Mogturmen, wanted the Mogwai to be able to easily reproduce themselves. The cocoon and gremlin stage are unwanted defects from when the Mogwai species was created. It turned out that all the positive attributes are recessive.

The Mogwai known as Gizmo is a perfect Mogwai since he's well-meaning and sweet, he was sent to Earth and was eventually found by Mr. Wing. In the first film, Mr. Wing's grandson revealed that there are three very important rules that anyone who is taking care of a Mogwai should know:

These rules were obeyed until Billy Peltzer's friend Pete Fountaine accidentally knocked over a brush cleaning jar that contained water, causing Gizmo to multiply, quickly spawning five new Mogwai, among them Stripe, who was the leader of the batch. The new Mogwai tricked Billy into feeding them after midnight, and all except Gizmo entered the cocoon stage.

The cocoons made by a Mogwai are large, gray-brown objects that resemble a moth's cocoon. They are made after the Mogwai eats food after midnight. After a period of time, the Mogwai has now transformed into a scaly gremlin, which hatches from the cocoon. What happens with the cocoon is unknown but it is possible that the hatched cocoon stays where it is like with insects that hatch from cocoons.

Like with the Gremlins, the Mogwai were portrayed with the usage of puppetry. Most of them were voiced by voice actors as well, such as Gizmo, who was voiced by Howie Mandel.

Several have claimed that the Hasbro toyline Furby plagiarized the design on the Mogwai. Rumor says that Warner Brothers Studios planned a lawsuit, but Hasbro settled for an unknown amount and released a special Gizmo Edition Furby. 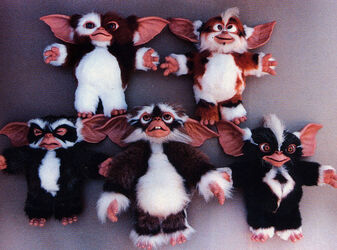 The Mogwai puppets used in Gremlins 2: the New Batch. 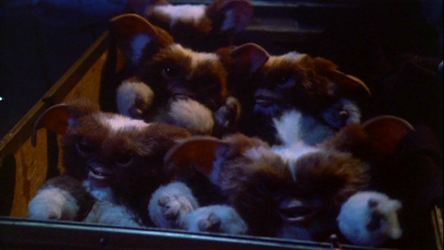 The first batch of Mogwai. 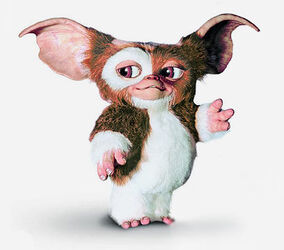 Gizmo, the most well-known Mogwai. 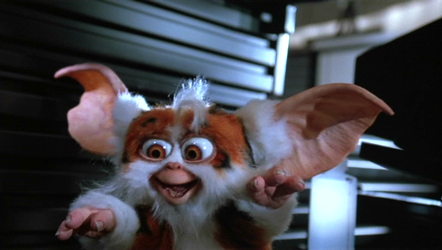 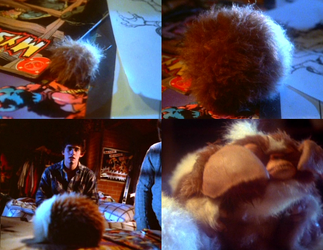 How a newly born Mogwai, in this case Stripe, grows in size and unfolds itself.
Community content is available under CC-BY-SA unless otherwise noted.
Advertisement